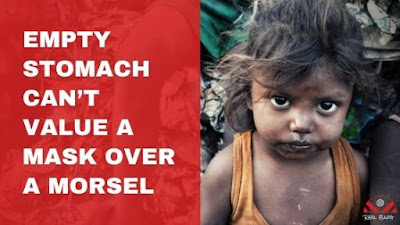 Destitution is a curse. I’m not talking about the below poverty line class, I’m talking about the people who are at the verge of starvation. In developing countries like India where more than a quarter of the population is underprivileged, the second wave of Coronavirus pandemic has significantly affected the poor people.

The irony is that the governments and bureaucrats expect this suppressed class of our economy to walk around the streets putting on a mask and carrying sanitizer. How come we be so dumb to think that they’ll have enough resources to buy stuff like this? Our governance and policies have proven to be a failure when we can’t provide the necessary tools to such sections of society to empower them to fight the pandemic.

Indeed, an empty stomach can’t value a mask or sanitizer over a morsel.

It’s not about just one nation. Throughout the decades we’ve built industries and bigger economies. But what about the economic disparity? The mess we’re in right now is a result of our poor economic understanding. The biggest failure of humanity is that we still aren’t able to provide two-time meals to the majority of the global population. And the same goes for our nation.

Still, these people are waiting in their shelters for a new sun to rise. Yes, they still don’t have houses; despite the fact that we’ve built toilets across the nation. Their willing yet painful patience is their most prominent sword against the pandemic. Every class of society should realize the power of this to fight such odd circumstances. The state we’re in right now shouldn’t have happened if we would have learnt a bit of what this suppressed section of society is living with. It’s been more than a year and we still aren’t serious about fighting Covid. I think Darwin was absolutely right, we’re just evolved monkeys.