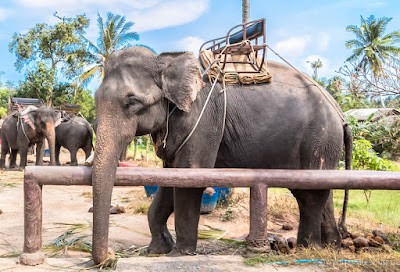 Whenever I see an elephant serving humans for riding purposes, I feel so sad. Though it comes under animal cruelty laws. It becomes a trendy fashion to ride elephants whenever we visit a wildlife sanctuary. They take photos and feel proud of it. Elephants are also being killed for ivory. Do you know why elephants have long teeth? Well, It helps them to protect their trunks which is the most important body part.

Elephants are one of the wisest animals on this planet. There are many amazing facts about them like intelligence, sharp memory. They are the largest land mammals and look cute, especially the baby elephants. They are social and like to live in a family group. You would be surprised to see them greeting each other with the help of their long trunks. They use their trunk for other things also like picking up objects, sucking up water, etc.

Riding elephants come under animal cruelty. We should not do this. You should read the following heartbreaking facts to know why you shouldn’t ride elephants?

This giant creature’s spine doesn’t support the weight of a human. Mother nature didn’t design it to carry the load. Doing so all day can result in permanent spine injuries. Mahout puts a wooden chair and couches on the elephant’s back and then, human weight. This clunky sitting arrangement rubs on their skin also and damages it. Soon, seriously infected wounds hurt the elephant

As I said above, elephants are very social, like humans. They love to spend their time with family. They feel happiness, sorrow, and pain. In elephant riding business, they are kept away from their families. They spend their whole life in solitary confinement.

Usually, elephants spend 12-18 Hours a day feeding. When they are serving the stupid human for so-called Elephant Ride, their master doesn’t feed them properly. Mostly they spend their lives in hunger. They are not supposed to allow roam around. In treks, baby elephant walks more then he can do. This is a pity. Isn’t it?

4. They face extreme cruelty before becoming a pet

It is stupefaction to accept that how men became successful to control such a large animal. Isn’t it? But when you would dig up the wretched truth about it, you would stop believing in humanity. Making an elephant pet, baby elephants dragged away from their mothers. Men confine them in thick chains and forced to stand for hours and hours.

Baby elephants cry but nobody helps them. They are beaten up severely for any disobedience. Mahout uses bullhooks to beat baby elephants. According to PETA, this process is known as “breaking their spirit”.  Once you watched a video of this process, I promise that you won’t be able to ride an elephant again.

I wanted to write this article because I have seen an elephant crying. They are beautiful animals and don’t deserve this kind of treatment by humans. It is not pride to ride an elephant. They face extreme human cruelty before surrendering themselves. I personally request you to all, those who are planning to visit a wildlife sanctuary where the elephant ride is offered often. Avoid it. Wild animals have a right to live in jungles. Don’t push your boundaries. Otherwise, mother nature would not forgive you at all.