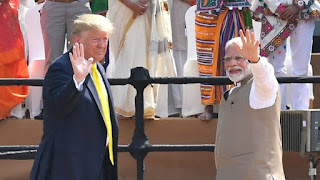 Many political leaders and analysts across India are arguing that during Donald Trump’s visit, the lack of bilateral trade deal between India and the USA indicates that both the countries gained almost nothing from the visit. It is considered merely an affluent ego-boosting exercise for Narendra Modi and Donald Trump. However, the argument is specious, it even misses the point of having bilateral engagements.

Myth 1 – Optics have no value in bilateral engagements

Considering the fact that amid his campaign trail in an election year, Trump flew halfway around the globe to India for a standalone visit. It highlights the seriousness the US allocates to its strategic partnership with India. In fact, Trump was clear about having no trade deal on the cards. Keeping in mind his so-called transactional attitude towards bilateral ties, he could’ve easily opted out of the tour citing almost no progress on trade.
A professor of international relations at King’s College London, Harsh V Pant quotes the visit “It tells you more about the state of India-US ties than any deal would have.”

Myth 2 – Bilateral trades are the only factor to evaluate relations

Undeniably, trade is one of the aspects of looking at the bilateral ties between nations, but it is not the only one. Making trade negotiations the face of international relations is a narrow-minded and selfish exercise. Talking about Donald Trump’s visit, Prime Minister Narendra Modi called it a “People-centric”, “People-driven”, and the “the most important partnership of the 21st century.”
Though bilateral trade deals have remained elusive, Trump’s maiden visit to India resulted quite successfully. Read the deliverables here:
https://www.firstpost.com/india/donald-trumps-visit-to-india-may-not-have-resulted-in-a-trade-deal-but-it-wasnt-without-strategic-deliverables-8094361.html